RUNNING TO GET LEAN Running is an amazing workout routine to get lean, but many people say they hate it, even though running to get lean is one of the best ways to obtain the body they desire.

While running is the most efficient way to burn calories and shed fat, why are so many people avoiding it in favor of longer, less effective workouts? Many people say it’s too hard or too unpleasant. And I completely understand. When I first started running, I struggled a bit too. But the struggle quickly turned into a passion. I want to share my story so that others can get over the hurdle (so to speak) and start running.

Ever since I can remember, I wanted to be a runner. The earliest memory is when I was 16 years old and woke up early before school to run outside. But it was always so painful for me and I hated it. So my bouts of running never lasted very long. It wasn’t until I was 20 years old that running became a regular part of my workout. I moved into a building that had a gym downstairs, and since I always wanted to be a runner… I made use of this machine.

At first, I could only run 5 or 10 minutes at a time so I decided to join a running club. I wanted to see how other people were able to run for long periods of time and also learn workouts I could do to improve my endurance. The workouts I did in the running club made me stronger and helped me to run longer on the treadmill.

HOW CAN I USE RUNNING IN MY WORKOUT ROUTINE TO GET LEAN?

You should use running as part of a workout routine to get lean by integrating it into your regular routine. You should commit to run as part of each and every workout session.

The 2 biggest tricks to get lean for me with running were:

Will Running Get Me Lean Quickly?

Running will get you lean quickly if you maintain a consistent schedule of workouts, and also run at a fast pace. Try to go as hard as you can for the shortest – instead of going for a long time at a slower pace.

My gym has 2 treadmills and I often go to the gym for a run right before dinner. Because it is so easy to just head downstairs and do a workout any time of the day, I run every day now. It has become such a habit that it would literally be more difficult for me NOT to run. Once I had easy access to a treadmill (and I knew what to do with it), my running and fitness took off.

Don’t worry if you don’t have a treadmill nearby, though. You can always run outside, which is the great thing about running. You don’t need a gym, weights, or any equipment. You can also run in most kinds of weather too – as long as there isn’t snow on the ground and a risk for you to slip on ice, you can put on a warm outfit and get yourself going. Running heats the body up quickly and so if you’re running outside in the cold weather you won’t be cold for long.

When I started running consistently, my eating improved – I was suddenly able to eat carbs … and eat until I was full (I was always obsessively counting calories prior to this)! Not only that, but running made me tired by the end of the day, so I started to fall asleep easily every night (which is another issue I had most of my life until I started seriously running). I can honestly say, becoming a runner has transformed my life. When you begin to integrate running consistently into your day, you will notice that your day begins to become a lot more defined. When you run consistently at a particular time, you mentally prepare for it. You know that at this time, I am going to run and so you begin to structure your work, meals, and sleep to accommodate it.

The best times to run, in my experience, are either first thing in the morning, or late in the evening before dinner. Let’s take a look at how both scenarios work to give you an incredible definition to your day.

Let’s say I’m preparing to run first thing in the morning. I have to be at work by 9, and so that means I need to shower after my run, pick up something to eat, and also commute. Right away, that gets me mentally prepared from the night before.

I know I have to get to sleep early so I’m energized for my run in the morning and also my day. From this, I will probably have an early dinner and I won’t waste

time watching TV or flipping through Instagram. Right there, my discipline and time management improves because I am preparing mentally for my workout and the plan for the next day.

Once I finish my run in the morning, I’m usually not hungry right afterwards. I’ll shower, get dressed, and head into the office but my appetite doesn’t usually come on until around 10 or 11. I usually pack some avocado toast with me and take some bites of that, and maybe eat an apple or banana alongside it. As you can see, I’ve avoided a heavy breakfast and I’m motivated to eat healthy food because I’m in the fitness mindset.

My big meal will probably come around lunchtime at 1 pm, and I’ll eat a rice and veggie bowl with a piece of fish or chicken breast. Maybe I’ll even treat myself to a plate of pasta if I really had a great run.

Let’s take the scenario where I run later in the day – in the evening before dinner. This also gives you structure to your day because you anticipate the evening run during work. You plan your eating accordingly – usually, my morning will be light on food but I will have a nice portion of carbs at lunchtime, either brown rice, pasta, or kasha.

By the time my run starts at 5:30 or 6, let’s say, I’m energized from my portion of lunchtime carbs but I’m also light because I haven’t eaten for several hours. Feeling this way you can really get in a powerful run and then work up a great appetite for dinner. Getting a good run in the evening before dinner makes you tired and you will likely fall asleep well.

Both the morning and evening runs improve your bedtime rituals and also your sleep. The morning run prompts you to have an early dinner, cut out distractions at night, and fall asleep in anticipation of your day. The evening run gives you a great sweat before dinner and helps you expend that last bit of energy so you can fall asleep soundly that night.

Change Your Life by Running To Get Lean

Running to get lean can have an impact on all aspects of your daily routine – it will help you lead a happier and healthier life. With an improved eating plan, sleep schedule, and mindset surrounding your runs, you will soon see that running is one of the best workouts to get lean! 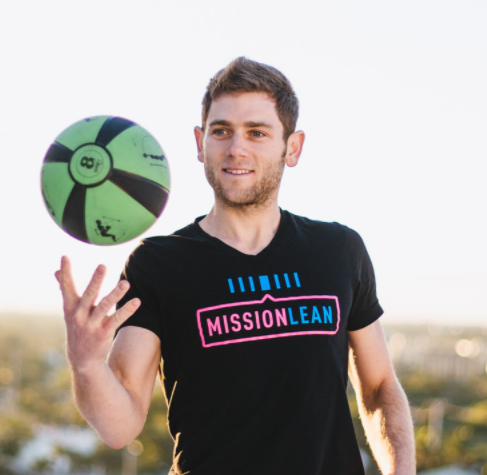 Jon Pearlman is a former standout tennis player at Harvard, ATP-ranked touring pro, and author of The Lean Body Manual.  He founded Mission Lean to share his unique formula for lean body fitness and nutrition, an approach that took over a decade to develop and perfect.  He is an ACE Certified Personal Trainer and Fitness Nutrition Specialist. GET OUR FREE NUTRITION GUIDE

Stop sabotaging your diet. Get your free e-book!

You have Successfully Subscribed!

Get lean with a free workout and monthly tips to your inbox.

Success! Check your inbox for your free workout!